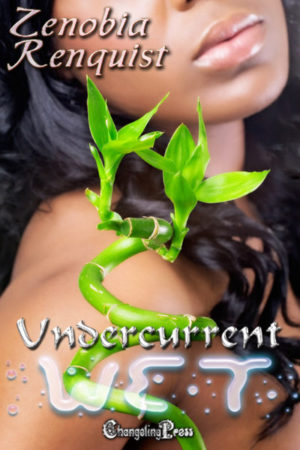 Lulu was sent to spy on the competition while pretending to be a guest so she could find out the secret of their success. Her search turns up Hotsuma, a man bound to water so he can use his power to bring good luck to those who imprisoned him.

Working to set him free ignites a passion in Lulu only Hotsuma can quench, but they can’t afford to let sex, no matter how good, distract them. Hotsuma’s captors aren’t about to let Lulu leave with their property and they are willing to use deadly force to stop her. More than luck is needed if Lulu and Hotsuma want their new love to survive.

Author’s Note: Read Overflow for a continuation of the story.

“That’s sweet, but we still don’t know why I’m the woman who can set you free. And speaking of which, let’s get to it. Masato is getting serious. We need to get you out of that room before he brings in the priest.”

Lulu took a breath and slipped below the water. She felt the shift this time when Hotsuma moved her from the hot springs to the pool room. She needed to ask how he could do that. Then again, it didn’t really matter. She was just happy he could. It saved her from trying to sneak down the hidden hallway.

She surfaced in the middle of the pool and looked around. Nothing had changed. Masato might suspect something, but he hadn’t done more than summon a priest. She hoped that was all he did.

“Are you ready?” Hotsuma hugged her waist, bringing her ass up against his arousal.

“You certainly are.” She giggled when he kissed her neck.

“The ladies in the hot spring were very… invigorating.”

“You could act a little embarrassed.”

“I could but I would be lying. Just like I would be lying if I said I only wanted you here to break the wards.” He slipped one hand down her stomach and between her lower lips.

The feel of his fingers passing over her clit made Lulu bite her lip to keep from moaning. She let her head fall back onto Hotsuma’s shoulder. “We haven’t started yet.”

“You haven’t started yet. I see no reason to wait.”

“Hotsuma, the barrier.” Her feeble attempt at arguing lost to the pleasure spreading through her body.

Water pushed at her breasts as Hotsuma guided her to the edge of the pool. “There.” He strummed her clit.

She touched the edge of the pool and barely registered the shock of the ward breaking. Hotsuma rewarded her by moving his fingers faster. She rocked her hips against his touch, which also rubbed her ass cheeks over his hard dick.

“So good,” he whispered as he slid his fingers lower and dipped two into her hole. “So tight.”

Her breath came out in huffs. His fingers rubbed her inside, bringing her close to an orgasm. Was it the spell’s side effects making her this hot or Hotsuma? He massaged one of her breasts with his free hand and she stopped caring.