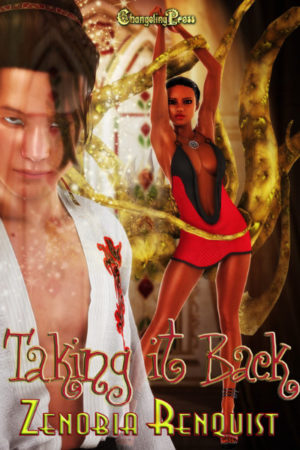 Author’s Note: Read Getting It Right for a continuation of the story.

She and Kosuke stared at each other for several breaths. Neither moved. Nervousness made her mouth dry. She licked her lips and noticed Kosuke’s gaze followed the path of her tongue. Hunger filled his eyes. Hunger for her, but he didn’t act on it.

“What are you waiting for?” she asked in a breathy voice.

Kosuke lowered her so her feet touched the floor but the tentacles didn’t release. “I said earlier that I have lost my powers. My people depend on pheromones to bring mates to us.”

He pulled one of his hands out of his pocket and gestured at her. “You do not desire me.”

“Um… you’re holding me with green tentacles, not that any other color would make it better. I think that would put a damper on anyone’s libido.”

“My power also provides me the ability to gather sustenance.”

And the wary feeling returned. She inched back a little — as far as the tentacles would let her. “What do you eat?”

“The sexual energy women release when they climax. The stronger and longer the climax, the bigger the meal. Without my powers I cannot ingest the energy. I’m starving to death.”

She didn’t know how to respond. What was she supposed to say to a statement like that? Only one thing came to mind. “When’s the last time you ate?”

“Um… months? How long does it take one of you to starve to death?”

“It depends on how many tentacles we have. I used to have fifteen. These are all that remain.” He gestured in her direction, referring to the five that held her. “My body is eating itself.”

“What happens when they’re gone?”

“If you get your powers back and you can eat, will they grow back?”

“Yes. I would have to gorge on sex for quite some time but they would return.” He shook his head. “It is no use though. My trip to this city of sin has not helped me. I have seen many hundreds of beautiful women since coming here. It is only you who has held my attention.”

She drooped a little. “You don’t think I’m beautiful.”

“Except you did. I tried to steer you toward the redhead at the bar but you wouldn’t listen.”