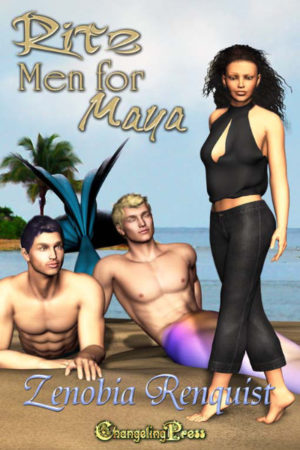 Maya is a half human, half merman who has decided to attend the fertility-virility rite and learn more about her merman heritage. The rite is meant to help mermen find their perfect mates, but Maya is only interested in using it as research.

Tam and Kessen are participants who are searching for their third. They are drawn to Maya and she to them. But, she refuses to acknowledge the bond and runs. Tam and Kessen must pursue her through her dreams if they hope to make their love a reality and prove they are the right men for Maya.

Tam drew the tips of his fingers up her spine.

The heat that had drawn her to Kessen and Tam earlier resurfaced. The intensity of it made her moan with pleasure. She slapped her hands over her mouth but knew they had heard her.

Kessen swam close to her and whispered, “Only one thing will make that feeling go away.”

Tam said, “So adamant. You haven’t even given us a chance.”

That was what she said, but if she didn’t get out of there, their teasing would wear her down. Two hot hard-bodies wanted to make a sandwich out of her. Of course she wanted the same, but not during the rite.

The men swam around and around her. One of them drew his hand over her breasts. She crossed her arms over her chest and backed away, except that put her in the path of the other, whose caudal fin stroked her neck.

“You haven’t told us your name,” Kessen said, skimming the front of his body before her face. He undulated just enough so her lips and nose brushed his genital slit.

She lashed out at him, trying to push him away and hit him at the same time, but he’d already left the spot she’d aimed for. Her attack left her chest unprotected. Tam swam past her, reaching beneath her top and caressing the underside of her bare breasts.

The heat originating from her spine was going to burn her alive. She was surprised the water wasn’t boiling. She needed to escape from them before she did something she regretted. “Get away from me,” Maya said with plenty of warning in her tone. She hoped it was plenty. If they heard her desperation, they’d never let her leave.

“You haven’t told us your name.” Kessen swam past her legs.

She thought he’d pass her without touching but that hope was dashed when his caudal fin slid between her legs. With a surprised squeak, she twisted away. That didn’t stop the longing ache that caress created.

Something moved against her back. It didn’t feel like a part of either Tam or Kessen’s anatomy. She turned to see what had touched her, but there was nothing. A tug at her neck preceded her top being ripped away.

She immediately crossed her arms over her chest, hugging her arms. “Give that back.”

Tam dangled the top before her face. “Your name for the top.”

“Ah.” He released her top and it floated toward her.

It was almost within her reach when Kessen snatched it away. He dangled it just out of her reach, grinning the whole while. “A kiss for your top.”

“I already told you my name. Give it to me.”

“That was his bargain. This is mine.”

With an annoyed sound, she kicked her legs. Tam wasn’t blocking her path, so she swam away as best she could while still covering her chest. She needed to get out of there. Every part of her except the rational part was lobbying for her to go along with them. Thankfully, the rational part was still in charge.

Kessen swam alongside her, keeping pace effortlessly. “The shore is miles away. You’ll tire yourself out needlessly swimming that way.”

“Then give me back my top and I can swim like normal.” She stopped and waited.

It was a stupid kiss — a tiny peck. Sure, every other contact had an adverse reaction on her good sense, but she had held strong. A simple kiss wouldn’t change anything. She wouldn’t let it. She would just do it and be done.

Kessen watched her. He trailed the top beside him, waving it like a flag.