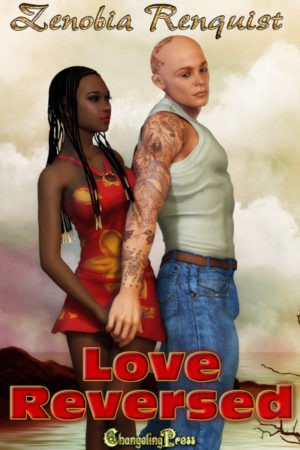 It’s only an even swap when both parties are satisfied.

Cinnamon came to the Hawaii celebrity retreat to meet her favorite actress. Calhoun crashed to find answers about his missing uncle. Neither of them signed on for the part of the tour that included body swapping. They have to find a way to switch back without anyone realizing their predicament. Long nights of searching for answers become even longer when curiosity takes over. It’s a once in a lifetime chance to see how the other half loves, they don’t plan to let it slip away.

“Sit.” Calhoun pointed at the bed.

She lowered herself slowly and folded her hands in her lap, a very defensive pose that made Calhoun want to shake her. He didn’t like seeing his body like this. Beyond it being disconcerting, it was damn annoying. The sooner they switched back, the better.

Until then, he needed time to think. He started for the door. “Get some sleep. I’ll meet you in the morning.”

Cinnamon jumped off the bed and grabbed his wrist, pulling him back.

“Shit! Lay off. Lay off.” He yanked out of her grip and rubbed his wrist.

“You’re not going anywhere in my body. You might finish what you started earlier.”

“Bullshit! You’re a guy and you’re in a woman’s body — literally. There is no way that isn’t what you’re thinking. I’m not letting you do perverted things to my body. You’re staying right here where I can keep an eye on you.”

Calhoun couldn’t argue since she wasn’t far off the mark. Actually, that was a bull’s-eye. He faced the room and her. “What do you propose we do?”

“We stay in this room until we change back.”

“All night and all day?”

“If that’s what it takes,” she said, crossing her arms.

He couldn’t help smirking at his most fearsome expression used against him. Was that what determination looked like on him? No wonder people got scared, not that he thought Cinnamon could back up the threat that look promised. He was more worried about her hurting him unintentionally, so he would concede to keep the peace. “Fine. That plan’s best anyway. If we tip off the old fogies that we’ve caught on, they may up the schedule.”

“Flint has been watching you since you got here.”

“I snuck in but it looks like I’m on the menu too. That’s the only reason they didn’t kick me out, I’m betting.” He looked around the room. “Who gets the bed and who gets the floor?”

“Normally, I’d say I get the bed, but circumstances being what they are…”