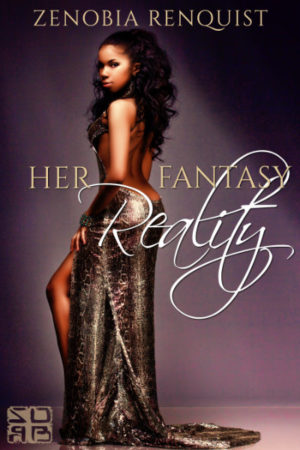 When the line between fantasy and reality is erased, the real fun begins…

Previously published as Fantasy vs Reality.

Noah slipped his hand around her waist. “Sweets, there’s an hors d’oeuvres buffet. You missed lunch, right? Go get a snack.”

She looked in the direction he indicated. Several people were gathered around a long table of varied finger foods and pre-poured drinks. “Looks delicious. Did you want anything?”

“Surprise me.” He kissed her cheek and gave her butt a pat.

“Sure.” She smiled at Clarice. “Coming with?”

Clarice shook her head. “No, I’m saving my appetite for dinner.”

“I should do the same. I don’t want to even think about the amount of exercise I’ll have to do to work off tonight.” She put an extra swing in her hips as she walked away, knowing Clarice was watching.

Noah would be watching too. He loved when Stacy wore outfits that showed off her body so people could see how good he had it. Her dress choice of the evening wasn’t just to infuriate the women. Though it was a special bonus to bask in the murderous gazes of the women who beheld Stacy. She could hear them gnashing their teeth and the sound resembled applause.

Tonight’s dress choice was meant to get Noah hot and bothered. Stacy showed off just enough skin to pique his interest and would flirt just the right amount to spark his jealousy. Combine and let stew over the length of a benefit dinner, and Noah would be ready to rip the dress off her the moment they arrived home. With the kids visiting their grandparents this weekend, that all but guaranteed sex against the front door, and on the couch, and possibly the coffee table, before taking it to the bedroom where they could really have some fun.

Noah would be in top form and employing every trick, to remind her that she’d married him, that she belonged to him, and that she shouldn’t be looking at anyone else when she had him. Thinking about the many ways he would impress those lessons on her body made her panties wet. This evening couldn’t end fast enough for her.

She stopped to assess the food offerings. Someone bumped into her and wetness hit her back. “What the hell?” She looked over her shoulder at the man carrying a small plate and wearing an apologetic smile.

“I’m sorry. I’m so sorry. I wasn’t paying attention.” He gave a strained chuckle. “At least it missed the dress, right?”

“Could you get me a napkin?” She snapped, not trying to play cordial while whatever had dripped on her was wending its way down her back to the top of her ass.

“Here. Let me uh… get… uh… Excuse me.” He leaned over and put his plate down before reaching past Stacy.

She thought he would grab a napkin. A surprised squeak escaped her mouth when he slipped an arm around her waist and pulled her back.

His hot mouth landed on her skin, followed by his tongue. He licked along her spine, removing the sauce, and sending Stacy’s libido into overdrive.

She nibbled her bottom lip as he trailed his mouth to the edge of her dress, making tiny flicks of his tongue at the top of the crack of her ass. She wiggled to invite him to go lower. Deeper. She wanted to feel his tongue on her rim.

He said in a husky voice, feathering his breath across the upper curve of her ass, “I think I got it all, but I’d better check to be sure. You don’t want to be sticky.”

Cupping her hips, he slipped his tongue beneath her dress to dance against her tailbone.

Stacy’s clit throbbed. She wished the man, whoever he was, would stop teasing her. Just yank her dress down and lick her asshole the way she wanted. The way he wanted, if his nibbling licks were any indication.

The man lifted his head and she met his gaze over her shoulder. “Maybe you should do it instead.”

Stacy blinked a few times and reality reasserted itself. The man stood with a napkin hovering above her back, wearing a sheepish expression that made him appear younger than he probably was. She snatched the napkin from him and dabbed at the sauce, getting to it right before it touched her dress.

“Sorry, again.” He retrieved his plate and walked away.

She turned to the table and stuffed the used napkin beneath one of the serving platters. This evening needed to be over sooner rather than later, if she was fantasizing about complete strangers licking her. Or maybe she was projecting. She glanced back toward the head table and found Noah engrossed in conversation with one of his colleagues.

Would he have even noticed some man with his face stuffed between her ass cheeks if it had really happened?