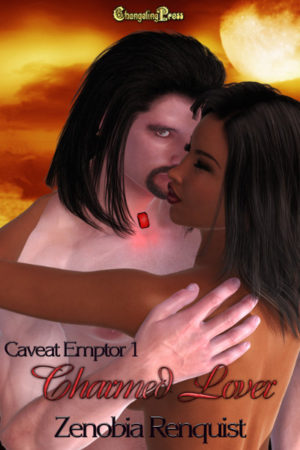 His body is hers to control. Her passion is his to enjoy.

Ryver is one of the many humans who owns a vampire. She purchased Theron for home security. When the magic charms keeping the vampires docile and subservient suddenly start failing, Theron goes from protector to threat. A nationwide, mandatory recall of all vampires is in effect. Ryver is ready to comply, but a night of passion spent in Theron’s arms changes her mind.

It’s only a matter of time before someone figures out Ryver and Theron’s secret. With the threat of mages bearing down on them, Ryver has to decide if she’s willing to give up her lover — or her freedom.

A hand on her hip guided her deeper into the elevator away from the door. The people surrounded her. Rachel felt like she would come from anticipation alone.

Did the people on the elevator block her from view? Had they parted so the person waiting got an eyeful?

Both scenarios appealed to her.

Another man said, “I told you, not that one. Come on.”

There were shuffling noises of two — maybe more — people walking away before the doors whispered closed once more and the elevator started climbing again.

How many people had been standing there? Had they seen her? Did they want to join in the fun? Rachel liked the idea of more hands with unknown owners fondling her body.

With her back to the doors, and possibly the other riders blocking her from view, she wasn’t worried about someone recognizing her. No one apologizing about stopping this elevator would know who she was because they didn’t work on the top floor. Someone from the top floor would have joined the fun — either as a groper or a gropee, depending on their position.

Her position had her blindfolded and spread, awaiting pleasure or torment with equal eagerness. Rachel preferred pleasure but torment had its benefits as well.